Our experiments are based on a powerful photon source followed by a linear optical network combined with conditional detection. The photon generation process relies on spontaneous parametric down conversion (SPDC), which probabilistically creates an even number of photons. As pumping source for the SPDC process we developed an ultraviolet femtosecond enhancement cavity delivering up to 7 Watt UV power at a repetition rate of 80 MHz. Subsequently, the SPDC photons are processed by linear optical elements like beam splitters and phase shifters. Detecting a well defined number of photons in different spatial modes leads to the observation of the desired multi-photon entangled states. 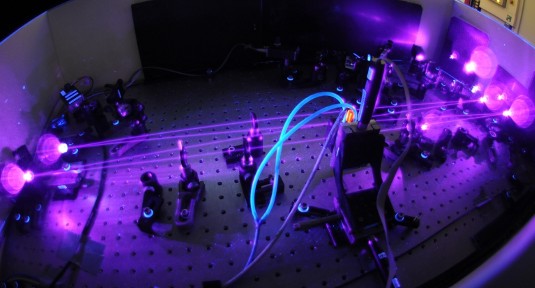 With this approach we have observed a four-photon cluster state, a family of four-photon entangled states including the GHZ state, and the four- and six-photon symmetric entangled Dicke states. These states are essential for several quantum information applications like one-way quantum computation (cluster states), quantum metrology (GHZ and Dicke states) or as quantum simulators for anyonic statistics (GHZ state). We have realized proof-of-principle demonstrations of the aforementioned applications. 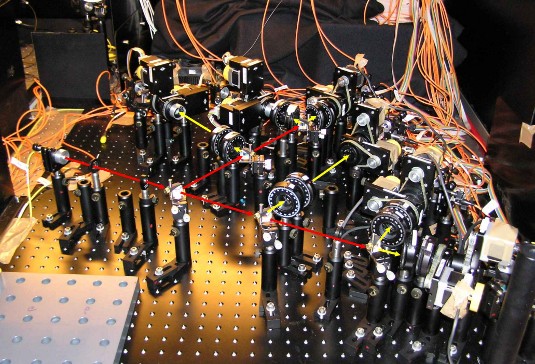 Experimental setup for observation of the 6-photon Dicke state.

Further, the entanglement of the experimentally observed states has to be verified as well as particular entanglement properties have to be characterized. To this end, ideally, a full reconstruction of the density matrix can be used, which we have realized for the four-qubit Dicke state and for the whole family of entangled four-qubit states. However, due to the exponential growth of the required measurements with an increasing number of qubits, tools have to be developed, which provide partial information of the state. This aspect is also studied in our group.