Entanglement between atomic systems and light is a promising approach for interfacing atomic quantum memories and photonic communication channels. In our project we work with single, optically trapped Rubidium atoms whose spin is entangled with the spin of single photons.

The starting point is a single Rb atom stored in an optical dipole trap. Entanglement is generated by exciting a short-lived upper state of the atom, from where it decays back emitting a single photon. The coherent superposition of the two decay channels provides an entangled state between the spin of the atom and the polarization of the emitted photon.

Characterization of the entangled state is performed by projective spin measurements on the atom and the photon. Combining those measurements we can perform complete quantum state tomography of the two-particle state. We obtain entanglement fidelity of up to 0.95. 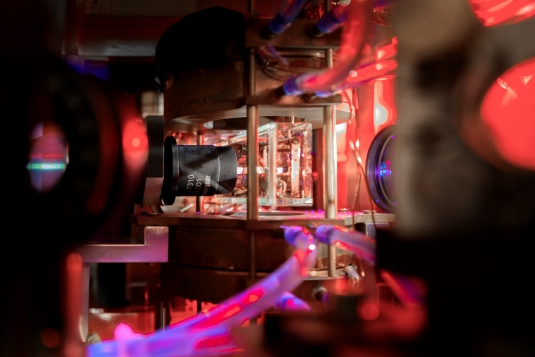 Picture of the single atom trap.

The new kind of entanglement opens new experimental possibilities. In particular we have demonstrated remote preparation of the atomic state via quantum teleportation. Furthermore, we are able to distribute the entanglement over long distance by exploiting long atomic coherence times together with implementation of a polarization-stabilized optical fiber link.

More recently we have established entanglement of two atoms independently trapped in two laboratories separated by 400 meters. With such a system of entangled atoms at a large distance a fundamental test of quantum mechanics became possible, the loophole-free test of Bell's inequality.

Our current work focuses improving the generation rate and fidelity of the entangled state of the two atoms. Such improvements could enable implementation of so-called device-independent protocols, where no assumptions on the underlying devices are required. Another direction is extension of the distance between the entangled particles in the context of quantum networks. Here, improvement of the coherence time of the stored quantum states, as well as conversion of the photons to the telecom wavelength for low-loss communication over optical fibers are the topics of intense study.