The development of reliable devices to generate single photons is crucial for applications in quantum cryptography, as well as for fundamental quantum optics experiments.

The ideal single photon source emits light such that only one of two detectors behind a semitransparent mirror registers an event. A specially suited process for that is fluorescence of a single two-level quantum system. Since excitation and subsequent decay to the initial state takes a finite time, only one photon is emitted at a time.

Fluorescence light observed from a single nitrogen-vacancy (NV) center in diamond exhibits strong photon antibunching: The measured pair correlation function g(2)(0) shows that only one photon is emitted at a time. NV centers are well localized, stable against photo bleaching even at room temperature, and can be addressed in simple experimental configurations.

The NV center in diamond consists of a substitutional nitrogen atom in a lattice site with an adjacent vacancy. 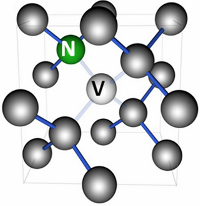 Its fluorescence spectrum is made up of a zero phonon line at 637nm and phononic sidebands extending to approx. 800nm. 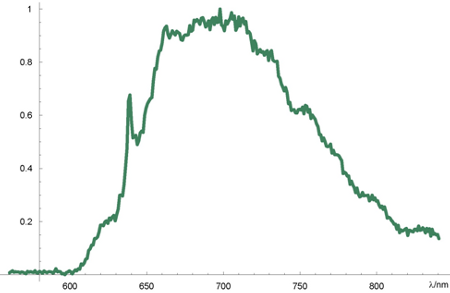 Fluorescence sprectrum of an NV center.

With a fluorescence lifetime of 11.6ns the NV-center allows for efficient single photon generation, however, its efficiency is limited by the existence of a shelving level. Additionally the high refractive index of bulk diamond restricts the efficiency to collect the fluorescence light.

A more convienient approach is the use of NV-center containing diamond nanocrystals, which - being much smaller than the wavelength of the fluorescence light - are not subject to refraction. Furthermore, diamond nanocrystals can be combined with a wide variety of microstructures and thus e.g. be incorporated into cavity-structures.

We are currently attempting to apply single NV-containing diamond nanocrystals to the waist of tapered optical fibers in order to manipulate and enhance the single photon emission characteristics.

Schematic of a tapered fiber with diamond nanocrystals on its waist.

Fluorescence image of NV-centers on the waist of a tapered fiber (scale in micrometer).