The laws of quantum mechanics allow for the generation of a secret string among two distant parties commonly referred to as Alice and Bob. Because the generated string can subsequently be used as a key for symmetric encryption techniques, these techniques are called quantum key distribution (QKD). For authentication purposes, however, there has to be an initial shared secret, this is why establishing a key by sending qubits, the quantum mechanical information entity living in a two dimensional Hilbert space, rather than classical bits is also referred to as quantum key growing.

There are several protocols, proven to be secure, which describe how to use quantum mechanics in order to establish a secret key. Here we use the BB84 Protocol (Bennett Brassard 1984) which is the first protocol ever described and probably also the most intuitive one when used with polarization encoded photons as qubits: Alice randomly prepares photons with one of the polarizations H, V, +45, -45 and sends them to Bob. He decides randomly on a basis to analyze the photons, {H,V} or {+45, -45}. In case Bob happens (50% chance) to choose the compatible basis, which is discussed publicly afterwards, his result will resemble Alice's choice. Otherwise they discard the qubit. The polarization is then mapped to classical bit values to retrieve a key string.

The range of quantum key distribution systems is known to be limited to a few hundreds of km due to the attenuation of the channel and the finite signal to noise ratio of available detectors. In recent years, several experiments could demonstrate QKD on successively longer distances of 100 to 200km both in fiber and free-space using telescopes. For longer distances, satellites could provide trusted nodes for even global scale QKD.

In a recent experiment we could achieve an important step towards QKD in space. In collaboration with the DLR it was possible to demonstrate the feasibility of QKD from an airplane to an optical ground station. In the experiment, we managed to integrate QKD hardware with an existing classical optical communication terminal. With the plane flying at a speed of 290 km/h it was the possible to generate a sifted key over a distance of 20 km at a rate of 145 bit/s. 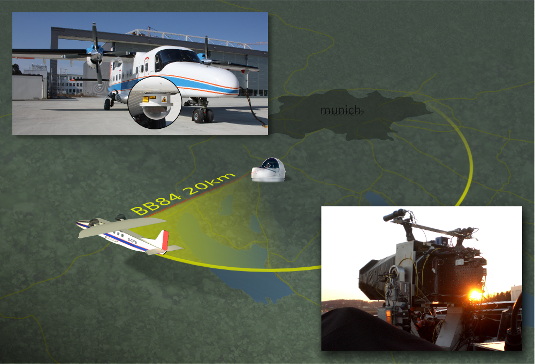 Between two university buildings, our group operates a QKD test system over a distance of 500 m which is remote controlled and able to operate continuously. 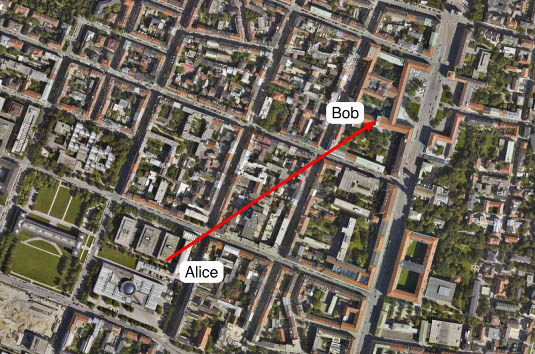 Current interest includes security analyses and attacks which are enabled due to imperfections in the setup (so called side channels). We are also working on quantum key distribution hardware realized in wave guides heading towards mobile units.