Single 87Rb atoms are loaded from a magneto-optical-trap (MOT) into an optical dipole trap that operates at a detuning of 61 nm from atomic resonance. Such far-off-resonance optical dipole traps provide long storage times and have in ideal case only negligible effect upon the atomic state. Due to the small trap volume (beam focus w0 = 1.9 µm), cold binary collisions assisted by cooling light prevent loading more than one atom into the trap. The storage time in the trap is limited by collisions with atoms from the background gas and the balance of the light pressure exerted by the cooling beams. In our case we obtain storage times of several seconds which is sufficient for the experiments. The fluorescence light emitted by the trapped atom is collected by a microscope objective and detected with single photon counting avalanche photodiodes (APDs) providing an overall collection efficiency of about 0.2 percent. 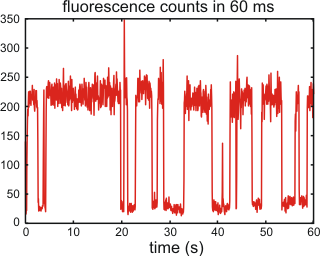